Born in Paris, Franck Hagendorf is a lyric tenor noted for the brilliance and warmth of his voice.
He studied with Maestro Nicolaï Gedda.
He participated in master-classes with Séna Jurinac, Richard Miller, Renato Capecchi, Gabriel Bacquier, Joan Dornemann and Diana Soviero.

Franck Hagendorf’s vast repertoire ranges from opera to oratorio, from French Melodie, German Art songs, and contemporary musical works, as well as folk and sacred (hazanout) Jewish music in both Yiddish and Hebrew.

His operatic repertoire includes performing the title role in Gounod’s Faust, Don José in Bizet’s Carmen, and Pinkerton in Puccini’s Madame Butterfly, with the Orchestra of Unesco in Paris.

Oratorio concerts include the Bach Magnificat, the Mozart Requiem and Coronation Mass, the Petite Messe Solenelle of Rossini, the Messa di Gloria of Puccini and the Messe de la Sainte Cécile of Gounod.

Should you wish a custom-made concert program, his possibilities are infinite. Do not hesitate to contact him as he would be happy to help you create a performance that best meets your needs.

Franck Hagendorf is inspired by a strong conviction to communicate his profound love of music through his singing.

Recent recital performances in France and the United States include:

Mr. Hagendorf’s concert performances have been broadcast live on France Musique in Paris and on Northeast Indiana Public Radio.

As Artist-in-Residence of FAME (Foundation for Music in Education), Franck Hagendorf sang for thousands of school children throughout northern Indiana and premiered a new work with the Fort Wayne Philharmonic. Indiana, United States

«Franck Hagendorf is an operatic tenor of great merit, for the beauty of his voice with its brilliant and warm timbre, as well as for his expressivity and rich musicality.

Franck Hagendorf has studied with me for several years.  I have witnessed remarkable progress as a result of his rigorous approach to his work.

I highly recommend this tenor, who has all the necessary qualities to launch a career as an opera singer.» 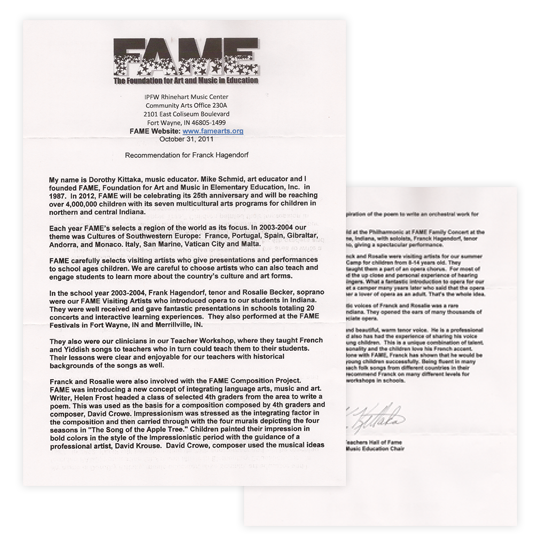 My name is Dorothy Kittaka, music educator. Mike Schmid, art educator and I founded FAME, Foundation for Art and Music in Elementary Education, Inc.  in 1987.  In 2012, FAME will be celebrating its 25th anniversary and will be reaching over 4,000,000 children with its seven multicultural arts programs for children in northern and central Indiana.

Each year FAME’s selects a region of the world as its focus. In 2003-2004 our theme was Cultures of Southwestern Europe:  France, Portugal, Spain, Gibraltar, Andorra, and Monaco. Italy, San Marine, Vatican City and Malta.

FAME carefully selects visiting artists who give presentations and performances to school ages children. We are careful to choose artists who can also teach and engage students to learn more about the country’s culture and art forms.

In the school year 2003-2004, Frank Hagendorf, tenor and Rosalie Becker, soprano were our FAME Visiting Artists who introduced opera to our students in Indiana.  They were well received and gave fantastic presentations in schools totaling 20 concerts and interactive learning experiences.  They also performed at the FAME Festivals in Fort Wayne, IN and Merrillville, IN.

They also were our clinicians in our Teacher Workshop, where they taught French and Yiddish songs to teachers who in turn could teach them to their students. Their lessons were clear and enjoyable for our teachers with historical backgrounds of the songs as well.

Franck and Rosalie were also involved with the FAME Composition Project.

FAME was introducing a new concept of integrating language arts, music and art. Writer, Helen Frost headed a class of selected 4th graders from the area to write a poem. This was used as the basis for a composition composed by 4th graders and composer, David Crowe. Impressionism was stressed as the integrating factor in the composition and then carried through with the four murals depicting the four seasons in “The Song of the Apple Tree.” Children painted their impression in bold colors in the style of the Impressionistic period with the guidance of a professional artist, David Krouse.  David Crowe, composer used the musical ideas of the children with the inspiration of the poem to write an orchestral work for soprano and tenor.

The world premiere was held at the Philharmonic at FAME Family Concert at the Embassy Centre, Fort Wayne, Indiana, with soloists, Franck Hagendorf, tenor and Rosalie Becker, soprano, giving a spectacular performance.

In the summer of 2004, Franck and Rosalie were visiting artists for our summer resident camp: FAME Arts Camp for children from 8-14 years old. They introduced opera and also taught them a part of an opera chorus.  For most of the campers, they never had the up close and personal experience of hearing “real” professional opera singers. What a fantastic introduction to opera for our campers. They loved it. I met a camper many years later who said that the opera experience in camp made her a lover of opera as an adult. That’s the whole idea.

Franck has an expressive and beautiful, warm tenor voice.  He is a professional tenor for so many years and also has had the experience of sharing his voice and love of singing with young children.  This is a unique combination of talent.  Franck has a delightful personality and the children love his French accent.  With the work that he has done with FAME, Franck has shown that he would be able to introduce opera to young children successfully. Being fluent in many languages, he could also teach folk songs from different countries in their native languages.  I would recommend Franck on many different levels for concert presentations and workshops in schools.